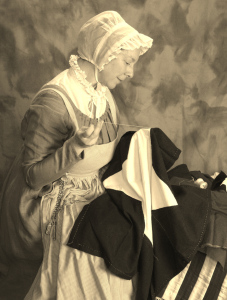 In the summer of 1813, Baltimore seamstress and widow, Mary Young Pickersgill was commissioned to make two flags for Major George Armistead, the Commandant of Fort McHenry. One was a smaller foul-weather flag measuring 17′ x 25′ and the other, a very large 42′ x 30′ fair-weather banner. Daybreak on September 14, 1814, the morning after the British bombardment of Fort McHenry, Francis Scott Key saw this larger flag in the “dawn’s early light”, inspiring him to write the words that would become the United States’ National Anthem. That very same Flag is still in existence, and remains one of our Nation’s most important and beloved artifacts, viewed my millions of visitors every year at the Smithsonian Institution’s National Museum of American History.
In her later years Mary Young Pickersgill became a great supporter of humanitarian causes in Baltimore, particularly those dealing with indigent widows. Today, the Pickersgill Retirement community which bears her name, continues to help senior citizens in need
Meet Mary Young Pickersgill, the plucky widow who literally sewed the fabric of our Nation’s history.

“We, sir, are ready at Fort McHenry to defend Baltimore against invading by the enemy . . . except that we have no suitable ensign to display over the Star Fort, and it is my desire to have a flag so large that the British will have no difficulty in seeing it from a distance.”