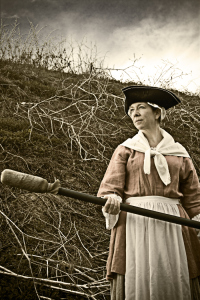 Mary Ludwig Hays was a true war hero. She valiantly strove beyond her traditional role of cleaning the soldiers’ campsite and carrying pitchers of cold water to cool both men and canon during the Battle of Monmouth. When she witnessed her husband wounded too severely to fulfill his post at a cannon, Mary took his place, standing with the artillerymen throughout the rest of the fight. George Washington personally commended Mary for her competence and valor, awarding her an honorary rank of Sergeant.

“While in the act of reaching for a cartridge, a cannon shot from the enemy passed directly between her legs without doing any other damage than carrying away the lower part of her petticoat. Looking at it with apparent unconcern, she observed that it was lucky it did not pass a little higher, for in that case it might have carried away something else.” – Joseph Plumb Martin, eyewitness to Molly Pitcher’s heroism at the Battle of Monmouth.