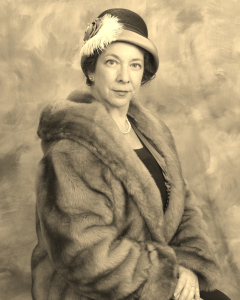 Alice Roosevelt’s life spanned much of the 20th century, and she witnessed political change from the inside out. The first child of Theodore Roosevelt, Alice was every bit her father’s daughter, and an integral part of an extended family which would help dictate American Politics for more than 1/2 a century. Always near the center of the social melee, yet walking the tight-rope of high society with an innate political savvy and scathing wit, even as a young girl she exhibited a precocious nature that kept people talking. “Princess Alice” chose personal independence over social and proprietary expectations. At a time when ladies were expected to remain demurely in the background she rebelled, drove unchaperoned, smoked in public, played poker, and occasionally wore long pants! Growing up in Washington DC, Alice came to understand American Politics as a native. Marriage to Ohio Congressman Nicholas Longworth deepened her involvement in the Washington Political scene. An invitation to dine with Mrs. Longworth was an invitation which no political hopeful could refuse. Her table was surrounded by the movers and shakers of government. Always interested in stirring up lively debate, her seating arrangements often put political rivals elbow to elbow. As Alice Roosevelt Longworth famously quipped, “If you can’t say something good about someone, sit right here by me.”

“I can be President of the United States, or I can attend to Alice. I cannot possibly do both.” -President Theodore Roosevelt