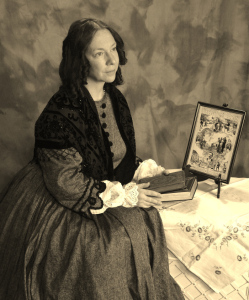 During Tea with President Lincoln in 1862, Harriet Beecher Stowe seemed to recall him saying something to the effect of “So you are the little lady that wrote the book that caused this Great War.” He was referring to her epic work, first published a decade earlier, “Uncle Tom’s Cabin, or Life Among the Lowly”. Harriet was the daughter of a minister, the sister of ministers and educators, and the wife of a minister. She believed that humanity was created under the “dominion of conscience” and that once the people were enlightened they must surely be compelled to do that which was right. Firmly believing in that Abolition was an imperative ordained by our Creator, with a heart full of grief and empathy she set pen to paper and wrote the best-selling book of the century. “Uncle Tom’s Cabin…” was so popular that it was soon turned into staged, dramatic versions. People who had been Pro-slavery were moved to tears by the sacrifice of Uncle Tom, and emboldened by the daring escape of Eliza with her baby Harry. Harriet Beecher Stowe believed that the most important character trait anyone can possess, is a strong sense of duty to conscience; Such a conscience that commands a person or nation to obey the Highest Law. A meeting with Harriet Beecher Stowe is like spending time with the best friend with whom you can share your most ardent desires for a better world, the dear aunt that you could always rely upon for sound advise, and the beloved mother you could always count on to kiss your wounds and make them feel better.
“It is no merit in the sorrowful that they weep, or to the oppressed and smothering that they grasp and struggle, nor to me, that I must speak for the oppressed who cannot speak for themselves. I hoped by such means as a lady may use, to do something to promote a good understanding among all the enemies of slavery…when a higher being has purposes to be accomplished he can make even a grain of mustard seed the means.”
Harriet Beecher Stowe on the writing of “Uncle Tom’s Cabin”
Harriet Beecher Stowe Program Categories:
Key Note & Motivational Addresses, Seminars, & Symposiums
Meet & Greets, Chautauquas, Libraries, & other adult & family venues,
Grade School & Middle School Aged Audiences ages 10 and up