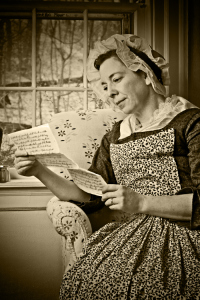 In her many letters to her husband and friends Abigail Adams expressed the concerns and accomplishments of an early American patriotic woman. Her most famous request was for Congress to “Remember the ladies” in the creation of the Constitution of the United States. It was her clear understanding that women’s influences in the domestic sphere were as integral to the development of a new nation as the the more public efforts of the founding fathers. Family economics, children’s education and civic responsibility, are the primary concerns of Abigail Adams. Her requests for legislation to benefit future generations included the necessity of education for all children regardless of sex or color, as well as the right to self-determination for all individuals including the emancipation of slaves and granting wives equal status under the law. An understanding of her hopes for posterity beg the question: If the founding fathers would have heeded Mrs. Adams advice sooner, would the nation would have been spared years of strife from civil war to civil rights? A conversation with “Dear Abigail”, 18th century wife and mother provides insight into the concerns of today’s Americans.

“I long to hear that you have declared an independency. And, by the way, in the new code of laws which I suppose it will be necessary for you to make, I desire you would remember the ladies… If particular care and attention is not paid to us ladies we are determined to foment a rebellion, and will not hold ourselves bound by laws in which we have no representation.” -Abigail Adams, in a letter to her husband John Adams, March 31, 1776

Some Examples of Abigail Adams Programming for Adult Audiences

Dearest Friend:
America’s greatest love story as told through the Letters of John and Abigail Adams.

Taxes and Tea Parties:
The Rhetoric that spurred a Revolution as seen through the eyes Abigail Adams

Kept Apart In A Time of War:
John Adams was away from home for years at a time in service of his country, yet through it all the Adams held faithful to each other, both focused on a higher cause.